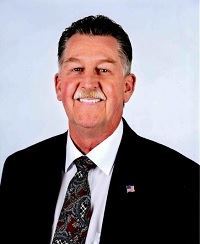 
Mitchel R Lindemann was born in Valley City, North Dakota and was raised primarily in Bismarck, N.D where he graduated from Bismarck High School (1976) and Bismarck Junior College (1978).  He received his Bachelor of Science degree in Vocal and Instrumental Music from Valley City State University (1981). After graduation he taught in the North Dakota Public School systems before moving to Arizona in 1986 where he accepted a teaching position with the Duncan Unified School District.

Mr. Lindemann was hired to teach Instrumental Music (Band) for the Douglas Unified School District in 1988.  He received a Master of Arts in Elementary Education degree (1991) and a Master of Arts in Education Administration degree (1993) both from Northern Arizona University.   In 1997 Mr. Lindemann received the Distinguished Alumni Award from NAU.  Mr. Lindemann completed an Internship for Public School Superintendence in 2000 from the University of Phoenix. Mr. Lindemann also holds Arizona certification in English as a Second language (ESL), Structured English Immersion (SEI) and Administration.

In 2004; as a Civic-minded individual, Mr. Lindemann applied for and was awarded the Vietnam Moving Wall Memorial which toured Douglas from April 9 through 17, 2005 and was presented at the Eighth street Veteran’s Park.