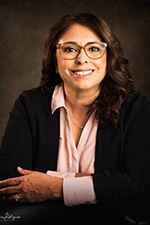 Ana Urquijo returns to the City of Douglas as a seasoned public manager with 33 years of experience in state, county, and local government. She returns after serving five years at the City of Tucson in positions of Executive Management Advisor, Administrative Services Officer/HR Director and since February of this year, Interim Assistant City Manager overseeing the Departments of Business Services, Information Technology, and the Offices of Internal Audit, Innovation & Strategy, and Equal Opportunity Programs. Ana has been a key contributor of efforts focused on strategic planning and financial sustainability to include competitive wage adjustments and employee centric programs.

Ms. Urquijo graduated from the University of Arizona with a Bachelor of Science degree in Public Administration and later earned a Master of Arts degree in Organizational Management from the University of Phoenix. She also maintains a Credentialed Manager designation with the International City/County Management Association, is a member of the Arizona City/County Management Association and is a Certified Public Manager, a designation issued by the State of Arizona and Arizona State University.

Ana Urquijo previously served the City of Douglas for 24 years as HR Director and Deputy City Manager. She thrives on hard work, community engagement, and planning the future of the organization. Born and raised in Douglas, Ana is a third-generation member of the community. Ms. Urquijo looks forward to using her broad skill set to implement the vision of the Mayor and Council and ensuring that Douglas is best positioned for the future as it recovers from the pandemic with a focus on development of the local economy and enhancing Douglas’ unique quality of life.

Before joining the City of Douglas and as she started her career after college, Ana worked for the State of Arizona Department of Administration in Phoenix as a Personnel Analyst and an Operations Support Supervisor overseeing Human Resources for the Department of Economic Security. She later worked for Cochise County as an HR Analyst as she transitioned her career closer to Douglas to raise her family. Ana and her husband, Jose, have four children and five grandchildren.

The City Manager's office welcomes your comments and suggestions.